No matter the inverter is high or low frequency, there are pros and cons for each design.

By definition, Low frequency power inverters got the name of “low frequency” because they use high speed power transistors to invert the DC voltage to AC power, but the LF inverter drives transistors at the same power frequency (60 Hz or 50Hz) as the AC sine wave power output voltage.

High frequency power inverters typically convert the DC to AC by driving the transistors at a much higher frequency from 50 Kilo Hz to a few million Hz. 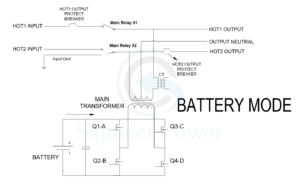 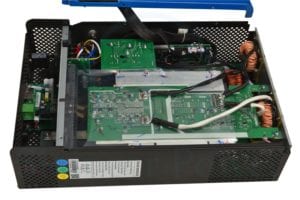 When delivering the same amount of power supply, the low frequency transformer outputs more power at each cycle, so it is required to work harder, resulting in a larger and heavier weight and package.

The high frequency inverter can deliver the same power at higher frequency with a much smaller and lighter transformer, as a result, the HF inverter is often called transformer-less inverter, or TL inverter.

Both of the two type of inverters can be built with utility charger or solar charger and be called “inverter charger”.

Here is the major difference of them:

Thanks to the heavy-duty transformer, low frequency inverters have much higher peak power capacity and reliability.

Low-frequency inverters take power impact through its big transformer which acts like a surge relief for the circuit.

While for high-frequency inverter, their electronic parts such as the MOSFETs are directly subject to load power fluctuations.

With fewer PCBs, low-frequency inverters are easier and cheaper to repair.

Want to join the discussion?
Feel free to contribute!

This site uses Akismet to reduce spam. Learn how your comment data is processed.